Welcome to the May update. We have had a busy period and have completed projects including the The Court House Hotel in Bacchus Marsh, base building and foyer upgrades in Queensberry St Carlton and architectural homes in Malvern East and Brighton.

We are currently working upgrades to the Grand Hotel in Mornington and our 300th project since 2015 at 549 St Kilda Rd in Melbourne, which includes base building and amenities upgrades.

The team at Madison Tiling wishes all our partners the very best for the festive season.

Our office will be closed from 5pm Friday 21st December and will reopen on Monday 14th January.

A busy November has seen Madison Tiling complete works at Rye RSL, Naughton’s Hotel Parkville, Caltex Traralgon East, Stage 1 of amenities and bar upgrades at Court House Hotel Footscray, bar upgrades at Baxter Tavern, amenities upgrades at Mornington Hotel and entrance works at St. Vincent’s Private Hospital Kew.
Congratulations to all our team and contract partners in getting through this period with success and professionalism.

Madison Tiling has been awarded the contract to supply and install the ceramic tiling, waterproofing and substrate preparation package for the new Caltex site in Traralgon East. Having worked on various Caltex sites in the past, this is the first of the new concept stores named “The Foodary” that Madison Tiling will be engaging works on. The new site will contain additional food outlets and open plan dining spaces.

Works are continuing on the upgrades to Naughton’s Hotel in Parkville. Public amenities and kitchen works are nearing completion and terrazzo stone floors and tiling to all bars will commence later this month.

Madison Tiling has begun works on upgrades to all public amenities at the Courthouse Hotel in Footscray. There is also a new bar which will stretch throughout the centre of the entire hotel. Works in the gaming room will be complete in mid October with further works to be complete by the end of November.

Madison Tiling is currently completing tiling to a new swimming pool in Eloura Ave in Brighton East. The pool is being tiled in lux white glass mosaics.

Madison Tiling has begun works at Naughton’s Hotel in Parkiville. The major renovation will include new terrazzo flooring from Fibonacci Stone, as well as tiling to new kitchens, bars and amenities. Madison Tiling will also undertake substrate preparation including floor levelling, screed and waterproofing for tiling and other resilient floor finishes. The hotel is due to re open in late November.

Alex Viola has joined the Madison Tiling team. Alex is finishing his Diploma in Construction Management and is a very welcomed addition.

Alex has shown great enthusiasm for the industry and his willingness to further his studies, coupled with on site experience, will be a huge plus for both Madison Tiling and Alex’s career in the near future.

Madison Tiling is currently completing works on stage 2 at the Rye RSL. Stage 1 has been extremely well received by the members and general public, with more exciting things to come as handover of stage 2 nears.

Madison Tiling is also continuing works at the Court House Hotel in Bacchus Marsh where a new rooftop bar is under construction.

Recent works at the Richmond Social, Trinket on Flinders Lane, Court Jester Hotel on Chapel St, Bomba Rooftop on Lonsdale St and Drums Hotel in Coburg have been completed.

Madison Tiling is currently involved in extensive upgrades and renovations to the Court Jester Hotel in Prahran, Drums Hotel in Coburg, Rye RSL, Bomba Rooftop Bar in Melbourne and the new bar Trinket on Flinders Lane in Melbourne.

Works will continue on the hotels throughout the year, while Bomba Rooftop and Trinket are due to open in late June 2018.

Works have began at Bomba Rooftop at the top end of Lonsdale St, Melbourne.

Demolition works and screeding commenced this week. Madison Tiling will complete its works on the refurbished rooftop bar throughout May. 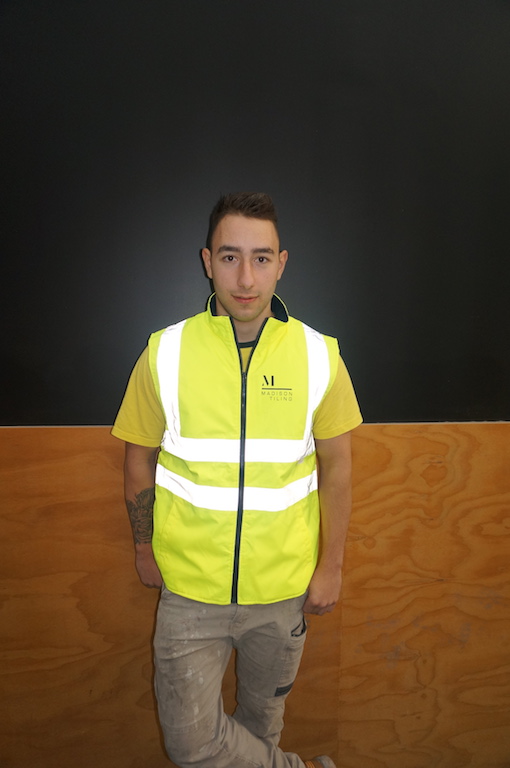 Adam Belbruno commenced his apprenticeship with Madison Tiling in 2015 and is currently in his fourth and final year.

Adam has been a valuable employee throughout his time with the company and has built his craftsmanship steadily as he readies himself for full qualification later this year.